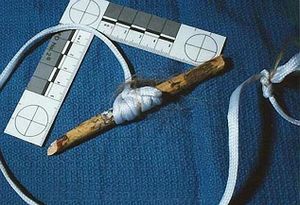 The device tied around JonBenet's neck consisted of a piece of nylon cord tied to a broken piece of one of Patsy Ramseys's paintbrushes. It was the same type of cord used to make the wrist-cord. According to neurological experts consulted on the case, the strangulation is what ended JonBenet's life - therefore making the "garrote" the murder weapon. 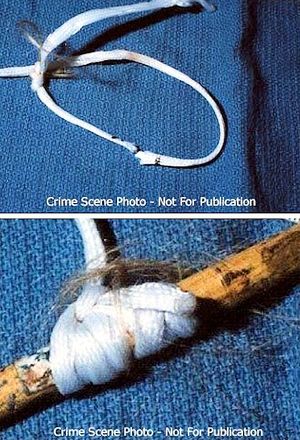 The knots on the "garrote"

The ends of the broken paintbrush are consistent with a paintbrush that has been snapped by hand. There is no indication that a knife was used to break the paintbrush. It is impossible to determine when the paintbrush was broken.

The victim's hair was entangled in both the knot at her neck, and the knot on the paintbrush, indicating that the device must have been created in close proximity to the victim. The "garrote" was therefore not constructed ahead of time, but while JonBenet was present.

The device "acted as a noose rather than a true garrote. The point where the rope became a noose was at the back of the neck, which suggested to some that JonBenét was lying facedown when the ligature was tied." (Schiller 1999, S. 661)

"Investigators would also enlist the aid of a knot expert, John Van Tassel of the Royal Canadian Mounted Police. He would eventually determine that the slip knots used in the wrist and neck ligatures were of standard fare. The end of the cord wrapped around the remains of the paintbrush were observed to be concentric loops and ended in a simple hitch that secured the knot in place. Again, there was nothing particularly fancy about the knots suggesting that a skilled perpetrator had been responsible for tying them." (Kolar 2013, S. 65f.)

Michael Kane: "If Mary [Lacy] has reached this conclusion [that the knots were "sophisticated"] she clearly has not reviewed her own file [...] I don't know where this came from that these were sophisticated knots. I don't know that anybody had the opportunity to untie those knots who was an expert in knots, but the Police Department had somebody who fit that category, and that was not the opinion of that person, who said these were very simple knots."

Beckner: "We had a knot expert look at them and none of them were anything complex. Many people probably could have tied the knots."

The "missing piece of the paintbrush"[edit]

Thomas: "I have heard john Ramsey talk about this very elaborate killing tool. in fact, i disagree. There was nothing that i saw that was elaborate about it. a broken paintbrush handle (Patsy's) with some cord wrapped around it, does not equate to an "elaborate" killing tool to me. In fact, I found it quite elementary."

A distraction - Staging the "Foreign Faction"[edit]

"I think the garrote is a key clue that may be familiar to someone from another country." - John Ramsey, March 20, 2000