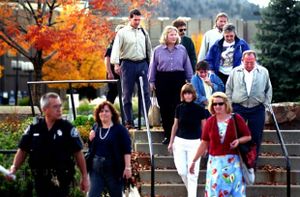 The Grand Jury's decision was not made public until 2013, fourteen years after the jury dispersed.

District Attorney Alex Hunter was criticized for refusing to convene a Grand Jury. As Police Chief Mark Beckner later expressed it "[the DA's office] did not want to do a grand jury until forced to."[1]

The Grand Jury was the result of an unprecedented intervention by the Governor of Colorado. In 1998, after Detective Steve Thomas's resignation letter, the District Attorney's handling of the Ramsey case came under intense scrutiny.

Governor Roy Romer, backed by a panel of Colorado District Attorneys, informed Alex Hunter that he would be replaced by a special prosecutor if he did not replace his existing Ramsey case attorneys, hire new, more experienced prosecutors, and convene a Grand Jury.

Alex Hunter acted to save his job, removing the two attorneys in charge of the Ramsey case (Peter Hofstrom and Trip DeMuth) and convened a Grand Jury conducted by Mike Kane.

Evidence Considered by the Grand Jury[edit]

The Grand Jury files remain under seal, so it is not publicly known what evidence and theories were considered.

Officials involved in the proceedings repeatedly described it as an "investigative Grand Jury", meaning that it did not confine its investigations to the theory presented to them by the prosecution.

"Former Denver prosecutor Craig Silverman said Hunter bent over backwards to present both sides to the grand jury, an unusual step for a prosecutor in a murder investigation."

Housekeeper Linda Hoffmann-Pugh, who testified before the Grand Jury, told The Denver Post that during her interactions with them, "the grand jury focused almost exclusively on Patsy Ramsey":

"It was almost all about Patsy, down to the underwear she had purchased from Bloomingdales," she said. "They wanted to know how she related to JonBenet. I felt in my heart they were going to indict Patsy."[2] 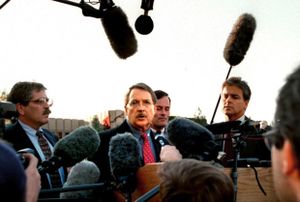 DA Alex Hunter announces the case will not go to trial as prosecutor Mike Kane stands behind him.

"The Boulder County grand jury has completed its work and will not return. No charges have been filed. ... The Ramsey family lives in a nightmare. There has been no end to the public lynching and speculation which marred this case from the beginning. ... The grand jurors have done their work extremely well, bringing to bear all their legal powers, life experiences and shrewdness. ... I must report to you that I and my prosecution task force believe we do not have sufficient evidence to warrant the filing of charges against anyone who has been investigated at this time. Under no circumstances will I or any of my advisers, prosecutors, the law-enforcement officers working on this case, or the grand jurors discuss grand-jury proceedings, today or forever, unless ordered by the court."

Hunter had in fact discussed the decision not to file charges on several occasions before the Jury completed its deliberations.

Another feature that made the Grand Jury unusual was that District Attorney Hunter allowed several witness for the defense, such as Lou Smit and the Ramseys' handwriting analysts, to testify.

The Ramseys released a book immediately after the Grand Jury in which they claimed that "people would have to finally see the jury's decision as our vindication".

"The battered justice system had creaked and shuddered, but it had worked! We had not been indicted! [...] People would have to finally see the jury's decision as our vindication. [...] After looking at the evidence--or lack of it--a jury of our peers had not indicted Patsy and me."

They and their attorney Lin Wood repeatedly referred to the Grand Jury as an example of the criminal justice system working as it should and claimed that "a jury of our peers" had dismissed the evidence against them. "I believe it was a vote straight-up, straight-down, no indictment," Lin Wood said. He even said "I believe the D.A.'s office circumvented the law by allowing that fact to be covered up."[3]

J. Robert Lowenbach, Senior Judge for the State of Colorado, ordered the release of four pages of sealed documents. His ruling was in response to a lawsuit brought by Daily Camera reporter Charlie Brennan and the Reporters Committee for Freedom of the Press seeking the release of the unprosecuted indictment of the Ramseys. Brennan claimed "[Hunter's] announcement left the public with the clear impression that the Grand Jury had determined not to indict anyone in connection with the death of JonBenét".

The court has now reviewed the documents submitted under seal,” Lowenbach wrote in his order. “The documents consist of 18 pages, nine each relating to John and Patricia Ramsey. It appears that the District Attorney, presumably acting at the direction of the Grand Jury, prepared a series of possible charges regarding John Ramsey and Patricia Ramsey based on the fact that the child had died and that there was evidence that a sexual assault of the child had occurred.”

Judge Lowenbach ruled only “official actions” signed by the jury foreman to be released.

John Ramsey's lawyer Hal Haddon made an attempt to block the release of the documents, saying it

only serves to further defame [John Ramsey] and his late wife Patricia Ramsey. Mr. Ramsey will have no access to whatever evidence the prosecutors presented to the grand jury and will have no ability to disprove these allegations in a court of law.

Haddon also said his client would have no opportunity "to evaluate the propriety of the indictment unless the entire grand jury record is unsealed and opened to public view". It is unclear if Haddon was genuinely calling on Judge Lowenbach to unseal the entire record. Judge Lowenbach pointed out that it was not in his power to release the entire Grand Jury record.

Lawyers have discussed the

For a district attorney not to endorse a grand jury's charge is "exceptionally rare," said analyst Craig Silverman, who was chief deputy district attorney in Denver for 16 years. Silverman described the past prosecutors' decisions in the case as sometimes "bizarre" and "strange". "Why would a D.A. have a grand jury deliberate and vote if he is not going to pursue the charges that they bring back?" Silverman said.

Boulder Police Department Chief Mark Beckner issued a statement saying: "It was difficult to remain silent for so many years ... Investigators at the time were disappointed in the then district attorney’s decision not to issue indictments. Cases are rarely perfect and often contain conflicting evidence. As a result, the opportunity to present the entire case to a jury may be lost forever." https://edition.cnn.com/2013/10/25/justice/jonbenet-ramsey-documents/index.html

Some have suggested that

In a 2016 CNN interview, John Ramsey claimed that the Grand Jury indicted him and Patsy for child abuse resulting in death (a felony) because they had failed to check that the doors were locked and had left their security alarm off when going to bed.

When the interviewer asked him about the other charge (accessory to first degree murder) John Ramsey claimed he was not aware of that other charge.