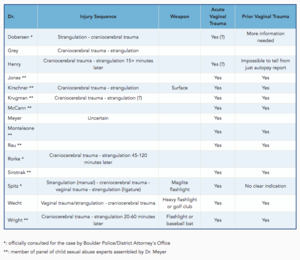 A table of doctors' opinions on JonBenét's injuries. The majority of doctors agree there was evidence of both sexual assault on the night of her death and prior to that night.

The autopsy of JonBenét Ramsey revealed chronic and acute injuries to her genitals. The presence of blood and an abrasion to the hymen/vaginal wall suggested there had been a penetration, though not by a penis, on the night of her death. There was evidence that the pubic area had been wiped down with a cloth. The victim had also been redressed.

To address the chronic injuries, police consulted specialists on child sexual abuse. Every one of the specialists consulted by police concurred that JonBenét Ramsey had sustained a serious injury to her hymen several days prior to her death. This injury had altered the structure of the hymen and had healed prior to the events of Christmas night. The experts were in agreement that the specific location and nature of this injury to the hymen (the inferior hymenal rim) distinguished it from normal genital variations.

John and Patsy Ramsey have denied that JonBenét was sexually assaulted at all - even on the night of her death. They have referred to allegations of prior abuse as "innuendos", attributing them to "tabloids".

Sexual Assault on the Night of Her Death[edit]

Meyer "state that the victim had received an injury consistent with digital penetration of her vagina. "

When examining a portion of the vaginal tissue under a microscope, coroner John Meyer observed "a small number of red blood cells is present on the eroded surface [of the hymen], as is birefringent foreign material".

This material, which "looked like wood"[1], was later analyzed by forensic botanists[2] who determined it was cellulose and that it was "consistent with the wood of the paintbrush used as a handle in the cord of the garrote".[3] 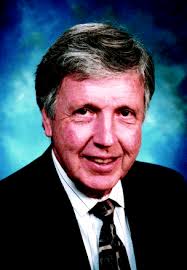 Dr John McCann was the Medical Director of the Child Protection Center at University of California Davis. Early in his career Dr McCann was a pioneer in establishing "the "normal" genital findings of the prepubertal female"[5] which included identifying the "normal anatomical variations that can erroneously be the basis for an inference of sexual abuse"[6] Dr McCann went on to co-author several medical atlases and reference-books in this area and also studied the healing processes of genital injuries.[7] By the mid-1990s Dr McCann was one of the nation's leading experts on injuries resulting from child sexual abuse. "Widely regarded nationally and internationally as an expert diagnostician in the field, he has conducted or supervised medical evaluations of over 10,000 child sexual abuse victims."[8] He was the chair of the American Professional Society on the Abuse of Children (APSAC) committee that developed guidelines for Child Sexual Abuse Medical Evaluations.[9] Dr McCann had previously given expert testimony in court cases, disputing accusations of child sexual abuse by pointing out normal variations in the genitalia.[10]

The Boulder Police provided Dr McCann with the autopsy report and photographs. Dr McCann observed that the genitals of JonBenét Ramsey met all the diagnostic criteria for prior sexual abuse.

According to McCann, examination findings that indicate chronic sexual abuse include the thickness of the rim of the hymen, irregularity of the edge of the hymen, the width or narrowness of the wall of the hymen, and exposure of structures of the vagina normally covered by the hymen. His report stated that there was evidence of prior hymeneal trauma as all of these criteria were seen in the post mortem examination of JonBenet.[11]

Since he believed the motive was "toileting abuse", Dr Krugman refrained from using the phrase "sexual abuse". He stated, for instance, "the injuries were not consistent with sexual assault, but with a child who was being physically abused". On another occasion Krugman said, "children who have some physical findings around the genital area, may have been physically abused or may have been sexually abused. And I saw nothing to let me know with certainty that sexual abuse was here".

Dr Krugman co-authored an article in 2001 which he stated:

"With the death of JonBenet Ramsey, America was forced to think about child abuse in a new way. We saw the death of a child in an affluent neighborhood, with wealthy and powerful parents, reinforcing what Dr. C. Henry Kempe of the Kempe Children's Center taught us decades ago: No family, rich or poor, is immune from this problem."[13]

John and Patsy Ramsey have never publicly acknowledged the fact that Jonbenet Ramsey was vaginally assaulted on the night of her death, instead referring to it as "inconclusive". They have also dismissed the evidence of prior sexual abuse and have never called for police to investigate that lead. In fact, in 1998, in spite of the unanimous conclusions of at least six national experts, the Ramseys told police that if they wanted the Ramseys to hand over their clothing from the night of the killing, it would be necessary "for the police department to state publicly that there had been no evidence of prior vaginal abuse of JonBenet".

John Ramsey: There have also been innuendos that she has been or was sexually molested. I can tell you that those were the most hurtful innuendos to us as a family, they are totally false.

Paula Woodward: What is your understanding as far as a possible sexual assault?

[John Ramsey does not respond]

Patsy Ramsey: [Looking at John] I-- I think that's inconclusive. I've been told that there was no penetration and that what was previously thought to be semen is not.

Larry King: If it was a pedophile, was your daughter sexually abused?

Patsy Ramsey: [Looking at John] I don't believe there is conclusive evidence of that.

Larry King: Have you talked to them about -- do they send you the autopsy reports?

John Ramsey: No, no. [In fact, the DA's office had provided the Ramseys' legal team with copies of the autopsy report].

The Ramseys also disputed the evidence of sexual assault in their book The Death of Innocence.

Instead, John Ramsey claims that the only potential indication of a sexual motive is the "garrote around Jonbenet's neck".

The Ramseys also dispute the evidence of prior sexual abuse in that book. They write:

Our pediatrician, Dr Francesco Beuf [...] a truly remarkable person, a brilliant man [...] knew our family well and believed that the talk of sexual abuse was so slanderous that he consented to an interview with KUSA in Denver..."

The Ramseys then quote Dr Beuf as saying: "as far as her medical history is concerned there was never any hint whatsoever of sexual abuse." The Ramseys neglect to point out that Dr Beuf never conducted a speculum exam and therefore never examined the hymen (the location of the evidence for prior sexual abuse) - thus, Dr Beuf had no way of seeing the genital injuries that the experts noticed after her death.

In The Death of Innocence the Ramseys also quote extensively from a TV documentary that supported their case, claiming that the idea of prior sexual abuse "is not supported by the balance of medical opinion". They then quote Denver Medical Examiner Dr Thomas Henry as saying, "From what is noted in the autopsy report, there is no evidence of injury to the anus, there is no evidence of injury to the skin around the vagina, the labia. There is no indication of healed scars in any of those areas. There is no other indication from the autopsy report at all that there is any other previous injuries that have healed in that area".

Other statements by Dr Henry indicate that the Ramseys took his remarks out of context. While talking to CNN, Dr Henry recognized the "limited" nature of the autopsy report, and stated he could not draw a conclusion either way, with regards to prior sexual abuse.[18]

John Ramsey continues to state the killer was primarily motivated by revenge and anger at John Ramsey. Though John and Burke also refer to the intruder as a "pedophile".

One frequently-repeated error in media reports is that the vaginal injuries could equally be attributed to "bubble bath" as to sexual abuse.

The confusion appears to stem from the publication of JonBenet's medical records from Dr Beuf, her pediatrician, which contain mention of a case of vaginal irritation and redness in 1994, two years prior to the crime, which may have been caused by bubble bath.

The slight rash observed by Dr Beuf in 1994 is entirely different to the severe hymen injuries observed in 1996 by Dr McCann, Dr Jones, Dr Monteleone, Dr Wright, Dr Kirschner, Dr Rao, and Dr Krugman. None of the doctors consulted in this case made a determination of prior sexual abuse on the basis of that rash, or anything else in the records released by Dr Beuf. The determination of prior sexual abuse came from the physical findings of the autopsy and the postmortem photographs.

Investigation of the Ramseys regarding Sexual Abuse[edit]

Police claimed that they "looked ... thoroughly into the issue of sexual abuse and molestation on the parts of all the family members. In the case of John Ramsey they basically said there is nothing there. With Patsy Ramsey they wanted her pediatric records to see if there was anything of the sort in her background."

Patsy Ramsey was informed of the indications of prior abuse in her 1998 interview: