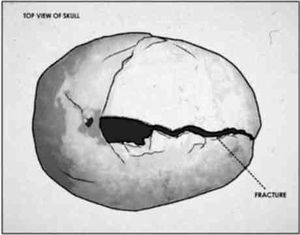 Diagram of the skull fracture

When JonBenet was found, nobody noticed any injury to her head. However, during the autopsy, it was revealed that she had a skull fracture.

B. Linear, comminuted fracture of right side of skull

No scalp trauma is identified.

Skull and Brain: Upon reflection of the scalp there is found to be an extensive area of scalp hemorrhage along the right temporoparietal area extending from the orbital ridge, posteriorly all the way to the occipital area. This encompasses an area measuring approximately 7 x 4 inches. This grossly appears to be fresh hemorrhage with no evidence of organization. At the superior extension of this area of hemorrhage is a linear to comminuted skull fracture which extends from the right occipital to posteroparietal area forward to the right frontal area across the parietal portion of the skull. the posteroparietal area of this fracture is a roughly rectangular shaped displaced fragment of skull measuring one and three-quarters by one-half inch. The hemorrhage and the fracture extend posteriorly just past the midline of the occipital area of the skull. This fracture measures approximately 8.5 inches in length. On removal of the skull cap there is found to be a thin film of subdural hemorrhage measuring approximately 7-8 cc over the surface of the right cerebral hemisphere and extending to the base of the cerebral hemisphere. The 1450 gm brain has a normal overall architecture. Mild narrowing of the sulci and flattening of the gyri are seen. No inflammation is identified. There is a thin film of subarachnoid hemorrhage overlying the entire right cerebral hemisphere. On the right cerebral hemisphere underlying the previously mentioned linear skull fracture is an extensive linear area of purple contusion extending from the right frontal area, posteriorly along the lateral aspect of the parietal region and into the occipital area. This area of contusion measures 8 inches in length with a width of up to 1.75 inches. At the tip of the right temporal lobe is a one-quarter by one quarter inch similar appearing purple contusion. Only very minimal contusion is present at the tip of the left temporal lobe. This area of contusion measures only one-half inch in maximum dimension. The cerebral vasculature contains no evidence of atherosclerosis. Multiple coronal sections of the cerebral hemispheres, brain stem and cerebullum disclose no additional abnormalities. The areas of previously described contusion are characterized by purple linear streak-like discolorations of the gray matter perpendicular to the surface of the cerebral cortex. These extend approximately 6 mm into the cerebral cortex. Examination of the base of the brain discloses no additional fractures. 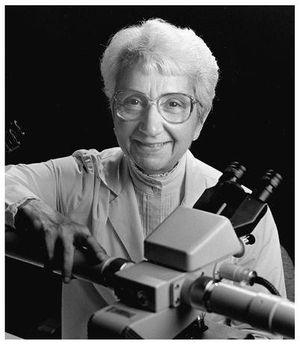 "Dr. Lucy Rorke, a neuro-pathologist with the Philadelphia Children's Hospital, helped explain the timing of some of the injuries sustained by JonBenet. She told investigators that the blow to the skull had immediately begun to hemorrhage, and it was not likely that she would have regained consciousness after receiving this injury. The blow to the head, if left untreated, would have been fatal.

The presence of cerebral edema, swelling of the brain, suggested that JonBenet had survived for some period of time after receiving the blow to her head. Blood from the injury slowly began to fill the cavity of the skull and began to build up pressure on her brain. As pressure increased, swelling was causing the medulla of the brain to push through the foramen magnum, the narrow opening at the base of the skull.

Dr. Rorke estimated that it would have taken an hour or so for the cerebral edema to develop, but that this swelling had not yet caused JonBenet's death.'Necrosis,' neurological changes to the brain cells, indicated a period of survival after the blow that could have ranged from between forty-five (45) minutes and two (2) hours. As pressure in her skull increased, JonBenet was beginning to experience the effects of 'brain death.' Her neurological and biological systems were beginning to shut down, and she may have been exhibiting signs of cheyne-stokes breathing. These are short, gasping breaths that may be present as the body struggles to satisfy its need for oxygen in the final stages of death.

The medical experts were in agreement: the blow to JonBenet's skull had taken place some period of time prior to her death by strangulation. The bruising beneath the garrote and the petechial hemorrhaging in her face and eyes were conclusive evidence that she was still alive when the tightening of the ligature ended her life."

What Caused the Head Injury?[edit]

I believed JonBenet was slammed against a hard surface, such as the edge of the tub, inflicting a mortal head wound.

Spitz "Dr. Werner Spitz, the forensic pathologist, even ran macabre tests to see if the heavy flashlight could have inflicted the kind of massive skull fracture that was found on JonBenet. To do so, a child’s cadaver was obtained so he could strike the skull with a similar flashlight and examine the resulting injury pattern. He said the results were consistent, that the damage could have been caused by the flashlight—but it could also have been caused by other things." (Thomas)

Spitz interview: "[the fracture] was perfectly rectangular. That piece of bone that was knocked out, remained attached on a hinge, and was bendable."[1]

Dr Spitz: I would certainly believe that the flashlight is the instrument of death.

Interviewer: What makes you so sure that it's compatible. How do you know?

Dr Spitz: Because it fits right into the [fracture]. It doesn't fit into the defect where it leaves some area to play with. It fits perfectly. [...] The flashlight was raised above the head of the perpetrator and, a hand down, with this portion, this wide, breaking the bone.[2]

Flashlight experiments were later re-enacted in the CBS documentary.

See Sequencing of the Injuries.