Patsy Ramsey claimed that she found a ransom note on the morning of December 26, 1996. 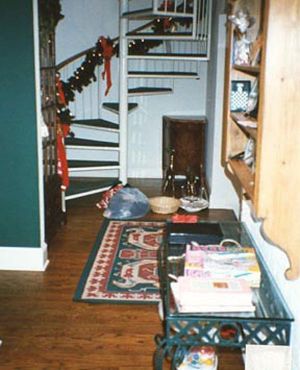 When police arrived the note was lying on hallway floorboards at the base of this photograph. Patsy claimed she had found the note earlier that morning on the spiral staircase.

Patsy Ramsey called 911 to report her daughter missing at 5:52 am. Patsy stated "there's a note left" but when asked about what the note said, replied "I don't know". When Officer Rick French arrived at the Ramsey residence five minutes later, John Ramsey directed him through the house, through the kitchen, and showed him where the note was lying "laid on the wooden floor" in a hallway which led to the foot of the spiral staircase.

John told Officer French that Patsy had found the note on one of the steps of the spiral staircase. Over the years the Ramseys gave slightly different accounts of who had moved the note. In 1997 Patsy said she carried it upstairs and handed it to John on the landing, but John said he ran downstairs and it was "still down on the first floor". John says he spread it out on the floor. In 1998 and later, Patsy and John both gave this version.

The ransom note showed no fingerprints or signs of handling, creasing, or damage.[1]

Listen carefully! We are a group of individuals that represent a small foreign faction. We xx respect your bussiness [sic] but not the country that it serves. At this time we have your daughter in our posession [sic]. She is safe and unharmed and if you want her to see 1997, you must follow our instructions to the letter.

You will withdraw $118,000.00 from your account. $100,000 will be in $100 bills and the remaining $18,000 in $20 bills. Make sure that you bring an adequate size attache to the bank. When you get home you will put the money in a brown paper bag. I will call you between 8 and 10 am tomorrow to instruct you on delivery. The delivery will be exhausting so I advise you to be rested. If we monitor you getting the money early, we might call you early to arrange an earlier delivery of the money and hence a earlier delivery pickup of your daughter.

Any deviation of my instructions will result in the immediate execution of your daughter. You will also be denied her remains for proper burial. The two gentlemen watching over your daughter do not particularly like you so I advise you not to provoke them. Speaking to anyone about your situation, such as Police, F.B.I., etc., will result in your daughter being beheaded. If we catch you talking to a stray dog, she dies. If you alert bank authorities, she dies. If the money is in any way marked or tampered with, she dies. You will be scanned for electronic devices and if any are found, she dies. You can try to deceive us but be warned that we are familiar with Law enforcement countermeasures and tactics. You stand a 99% chance of killing your daughter if you try to out smart us. Follow our instructions and you stand a 100% chance of getting her back. You and your family are under constant scrutiny as well as the authorities. Don't try to grow a brain John. You are not the only fat cat around so don't think that killing will be difficult. Don't underestimate us John. Use that good southern common sense of yours. It is up to you now John!

The note was eventually determined to come from [...] . According to Patsy she usually kept her notepad in a "little desk kind of area ... with just mumble-jumble paperwork" near the door to the kitchen. This was also where the phone was from which Patsy called 911.

Officer Patterson reported: I spoke with John Ramsey about the handwriting samples. He went out of the den to a counter near the bottom of the spiral staircase. He picked up two letter sized pads of white lined paper and handed them to me. He said that one was Patsy’s and one was his that they used to write messages on. I identified each pad with the name of the person he identified as the writer and then gave the pads to Sgt. Whitson for later comparison with the ransom note. Sgt. Whitson maintained custody of the pads.

"Chet Ubowski at the CBI had pulled startling information from the tablet belonging to patsy Ramsey. By comparing tear patterns, Ubowski had determined that the first twelve pages were missing and the next four - pages 13 through 16 - contained doodles and lists and some miscellaneous writing."

"But the next group of pages, 17 through 25, were also missing from the tablet. The following page, 26, was the practice ransom note (Mr. and Mrs. I), and that page showed evidence of ink bleedthrough from the missing page 25."

"Comparisons of the ragged tops of the ransom note pages with the remnants left in the tablet proved that it had come from pages 27, 28, and 29."

"Furthermore, the ink bleedthrough discovered on page 26 indicated that perhaps still another practice note could have been writtenon page 25 and been discarded. Two possible practice notes and one real one covering three pages led me to believe that the killer had spend more time in the house composing the ransom note than we originally thought."

"But even more significant, it seemed clear that whoever wrote it was unafraid of being caught in the house. We never found the missing pages."

"Crime scene techs at the house had recovered three Sharpie felt-tip pens from an orange metal container on the kitchen counter beneath the telephone from which Patsy had made her 911 call, not far from where the ransom note tablet was found....the U.S. Secret Service eventually determined that one of those pens, a pre-November 1992 water- based ink Sharpie, was used to write both the practice and actual ransom notes. The Secret Service, which maintains a huge database on inks because of federally mandated assignment to chase forgers, told us, "The ink on the notes is unique in the collection of approximately 7,000 standards from the Ink Library." That meant that whoever wrote the notes used the exact pen from that cup. They not only left the pad behind but, when they finished, neatly put the felt-tip pen in its container" (Thomas 2000:54).

There is no public record of any forensic testing of the pen either for fingerprints, DNA, fibers or serological analysis.

ST: ... I don’t think it’s a far reach to say that the note was written inside the house given the circumstance with the pad and the character comparison and so forth.

ST: The note was written from a pad inside the home.

BARBARA WALTERS: And… the question is, if the intruder was planning to write a note why wouldn't he or she have brought their own pad and paper?

JOHN RAMSEY: They knew that the less they brought in the house the better.

BARBARA WALTERS: But they planned to write a note?

Suspicious Features of the Note[edit]

Theories of the Ransom Note[edit]

It was a real kidnapping gone wrong[edit]

It was a diversion by an intruder[edit]

It served a "symbolic" purpose[edit]

It's for removing the body[edit]

It's to get John out of the house[edit]