The body was found in the wine cellar. Urine-stains indicated that death may have occurred on the carpet just outside of that cellar. It is not known where in the house the assault began. The perpetrator must have entered the kitchen area at some point as that is where the pen was kept. Other areas of possible relevance to the investigation are: JonBenet's bedroom (specifically JonBenet's bed), the dining room and the basement.

Objects known to be related to the crime:

Objects suspected to be related to the crime:

Experts were consulted on various injuries. 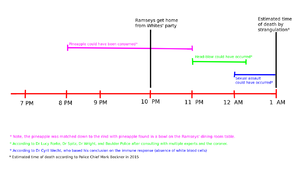 Timeline of Christmas night depicting the likely sequencing of the injuries, based on analysis of the body.

As of 2015, the official estimate of time of death was around 1:00 AM, according to Boulder Police Chief Mark Beckner.[1]

"Contrary to several media reports over the past few days, the autopsy report on JonBenet Ramsey does not and has never contained information on the estimated time of death. I have not been able to determine the original source of the statement that the report contained the estimated time of death, but it certainly did not come from this office. The time of an "unwitnessed" death is very difficult to determine with any precision, and at best is an estimate based not only on autopsy findings but also on investigative information. I consider estimation of time of death to be an interpretive finding rather than a factual statement, and it is not this Office's practice to include this estimate as part of any autopsy report. As has been stated in the past, it would also be inappropriate for me, as a potential expert and material witness, to make interpretive statements prior to testifying in court." John E. Meyer, M.D., Boulder County Coroner.

When JonBenet's body was found, she was wearing the same shirt and hair-ties she had worn to the Whites' Christmas party the previous evening. She was also wearing a pair of underwear that were several sizes too big for her, and a pair of boys' long johns.

The shoes, pants, and vest she had worn to the Whites' party were all up in her room, strewn on the floor and on the second bed.

In 1997 Boulder Police sent some evidence to Skip Palenik, who owns and operates Microtrace laboratory, who had custody of it for nearly 10 years.[2]

"I examined the particles left behind on her clothing," he said. "It was just a very small sample, picked up by evidence technicians using tape." Palenik, 60, wrote a report about the particles, which he declined to discuss because of the case. The report went to the Boulder County district attorney's office and the Boulder Police Department in 1997.

Other hairs and fibers:

We would find that a number of visitors had used the bed while the child was elsewhere. The hair could have come from any of them, or it could have been transferred through some other contact, such as in a washing machine or dryer.

Traces of JonBenet Ramsey's blood were found on:

Traces of creatinine (indicative of urine) were found on:

Four handwriting experts were consulted by the Boulder Police Department. Two believed Patsy Ramsey wrote the ransom note though none were willing to testify in court. None could eliminate Patsy Ramsey as the writer.

Two handwriting experts were hired by the Ramseys' defense team and subsequently retained by the District Attorney's office. Both stated there were differences between Patsy Ramsey's writing and the note, and said it was unlikely she wrote it. Though neither could eliminate Patsy Ramsey as the writer.

At least four board-certified handwriting experts have commented publicly on the note, stating they were willing to testify that Patsy Ramsey wrote it.

Over 240 fingerprints were found in the home. According to the CBI and FBI, "almost all" were matched to people by early 1997. Known fingerprints and footprints include:

Only some DNA testing reports have been released. There is no public list of which items have been tested for DNA. Based on limited information we know:

There is no scientific way to determine how or when a piece of DNA was deposited. Multiple theories have been put forward to explain how unidentified DNA ended up on evidence:

Night of the Crime